Make your Empanada filling first and let it rest over night to enhance flavors.

Remove chorizo from casing and break up with a fork.

Place in hot pan and cook through reserving cooking fat.

Sweat peppers and onions until soft.

Remove from heat and place chorizo, potatoes and cooking fat in a bowl with corn, peppers and onions.

Season with salt to taste.

Let chill and rest over night to allow flavors to enhance.

Mix flour and salt into mixer.

Add only the yolk of the egg (save the egg white) and mix.

Remove dough and work with hands for 1-3 minutes. Roll into a ball. Flatten and refrigerate for at least 30 minutes.

Roll out dough then cut out small circles with a mold.

Brush edges with the egg white.

Add filling into center of dough then roll dough over filling (see below) until it closes. (use a fork to clamp down edges)

Brush with egg wash and bake at 325°F until golden brown. 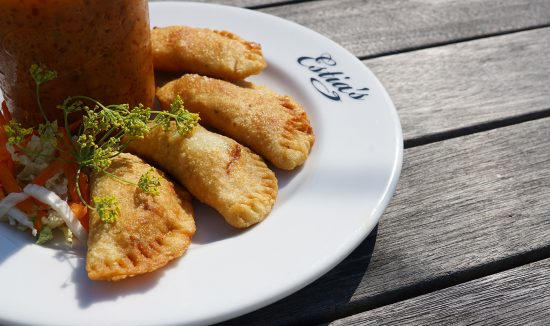 Add Masa to bowl and slowly incorporate hot water until a dough starts to form.

Take a small piece of dough, roll into a ball then flatten out until it is a thin circle.

Place filling in the center of the circle then fold around the filling until it closes.