I’ve heard of the Iroquois Indian approach to maximizing garden space by planting corn with pole beans and squash.

Last winter while reading the Dan Barber story which starts with his 3 sisters experience in the book  “The Third Plate”, I realized that my raised bed would be an appropriate location to study the 3 sisters myself.

The raised bed in my Sag Harbor, New York garden is 4.5 feet wide and 75 feet long. The planter has been built with clear, untreated cedar, almost 4 feet deep, filled with compost from our lawn and kitchen as well as composted cow & horse manure, fortified with new compost prior to each planting over the past 8 years. My approach to the 3 sisters “Seed to Plate” garden in Estia’s raised bed involved 2 types of corn, a shorter variety on the sunrise side, followed by a row of pole beans, a row of squash, a second row of pole beans and finally a row of taller Indian style field corn. 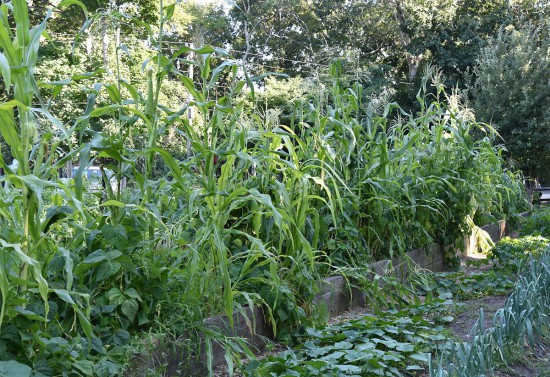 This project started with an order to Territorial Seed Company, choosing Red Kuri squash (an old favorite with deep red color of flesh and sweet flavor) to run down the center of the bed, on either side for the pole beans I choose a variety called Lady Di (good for early harvest  followed by a long season where new beans emerge and existing pods dry on the vine well). The 2 varieties of corn, Hookers Sweet Indian (short stalk, small cobs) and Hopi Blue (tall stalk, deep blue corn color). The corn was planted first, on the outer edges of the bed, for this location late May was appropriate.

The corn germinated in a week to 10 days and once established at 5 inches, it was thinned and weeded. We then planted the beans about 6 inches in from the corn starts toward the inside of the bed. Then, a week later, as the beans germinated, we raised a row down the center of the bed and planted our squash seeds, once again weeding the bed. The bed was weeded once more as the first  leaves of the squash plants filled in. After that we watched and harvested.

It was helpful for me to have read that the Iroquois believed that the companion planting of beans, squash and corn would provide reinforcement of the nitrogen through the beans, shade from weed growth through the squash, and the powerful, multi use benefits of corn. They also believed that focusing on the garden’s health through direct thought and concern as the garden grows is good for both, the plants and the gardener. For me, through the seeding process, early weeding, harvesting the first beans, and the enjoyment of watching it grow through my camera lens was, in fact, pure joy.

We created a video that will take you through the entire process described above. It enables us to share in the season of 2015. Our gardens performance was all I’d hoped it would be. We were blessed with gallons of beans for the first phase from mid July until early August, then all was left alone until the final harvest. In the end of September when the corn had turned a light brown and the squash was finding it’s delightful final red hue we began the process of removing all of the vegetable, dried in the autumn sun. The corn was prolific, after removing all of the cobs and cleaning their husks we were left with  3 gallons of dried Indian style corn ready for grinding to meal. The majority of the harvest came from the Hopi, in hind sight it would have been better to have harvested the Hookers Sweet Indian early and used it fresh, it did not dry as well on the plant as the Hopi. 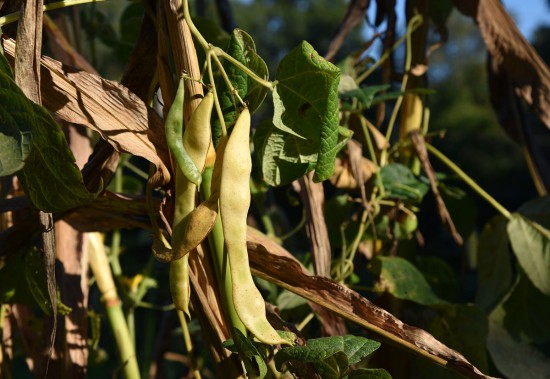 Pole Beans drying on the Vine

Our beans were magical, again the fresh harvest was productive and we were able to bring in enough dried pods to shuck a final, dried bean storage of 2.5 gallons. We find the best treatment for our pre storage is to place both the corn and the beans on sheet pans and toast them separately in a 250 degree oven for 30 minutes prior to placing in glass jars for storage in our dark, cool basement. 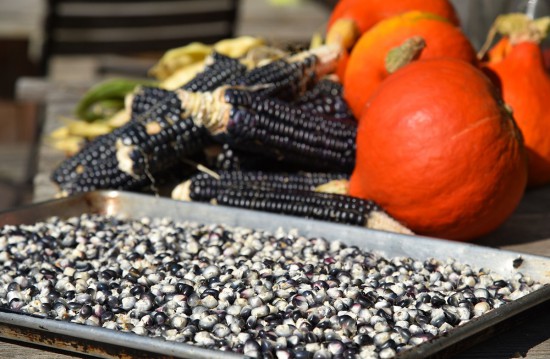 The corn grinds well as needed in a food processor. The red Kuri Squash was sweet and beautiful, alas, our limited space reduced the productivity and we only yielded 2 cases or about 25 pieces of squash. Next year, I intend to do this again, with a new corn variety to replace the Hooker Sweet Corn and a wider bed (8 feet) to allow the squash more time in the sun.

I hope you give our fish recipe a try which uses all of the three sisters ingredients. It works well with most white fish, this weekend we will use Blackfish from Montauk.