Iacono is a family run chicken farm on the edge of the village of East Hampton.  I stopped in today to visit with Anthony Iacono and his mother, primarily to place an order for six chickens.  I will use them on February 20th as I prepare a dish to be served among several other chefs’ work at a benefit for my friend Gerry Hayden.

The dish will be called Iacono Albondigas in consommé. The chicken meatballs will be served in espresso cups with the Estia logo on it, floating in the clarified broth with a corn tortilla skewered into it like a toothpick.

The fact that we can celebrate Gerry is important to me.  He’s been a close friend for 20 years.  I can’t imagine his challenge facing A.L.S., but he’s doing it with grace and fortitude.  His charity, Hayden’s Heroes, has been successful raising funds and awareness for Lou Gehrig’s Disease.  This evening will be for him. 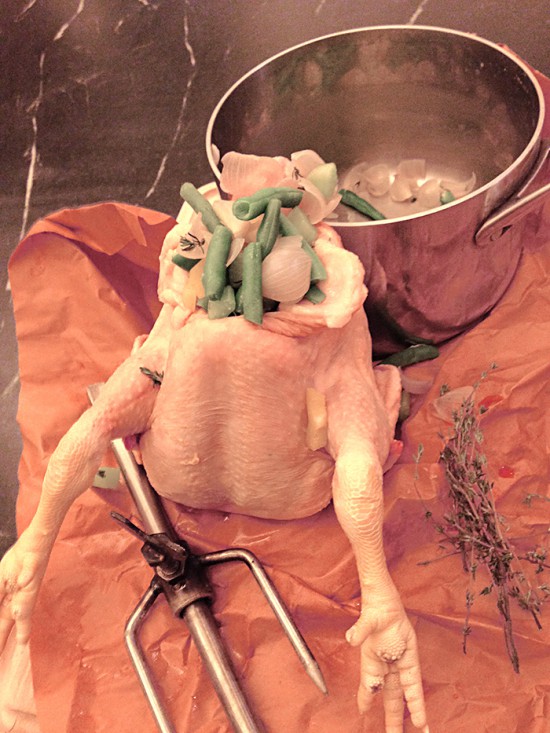 I was able to use their chicken in another way today. Jessica is on a Scarsdale diet. For Thursday, it calls for Chicken and Green Beans. This is an all-in-one cooking approach, only a small pan and a spit needed.

Start with ½ -cup of water in a saucepan and bring to a boil. Add 3 shallots quartered, ½-pound green beans snapped and 1 celery stalk chopped. Reduce heat and simmer for 3 minutes and then strain. Now add ½-tsp salt and ½-tsp of fresh thyme.

Place the chicken on a cutting board and stuff the vegetables in the bird. Then place the bird on the spit. I have found that it helps to fold the extra skin over the stuffing and then run the spit through the bird to hold the stuffing inside. Season the bird with salt and pepper to taste.

Place the bird on the rotisserie and turn occasionally for an hour and 15 minutes. Remove from the flame and let it sit for ten minutes.

When plating for the Scarsdale diet, attempt to remove as much skin as possible.  (Personally, I’ll be loving the skin). 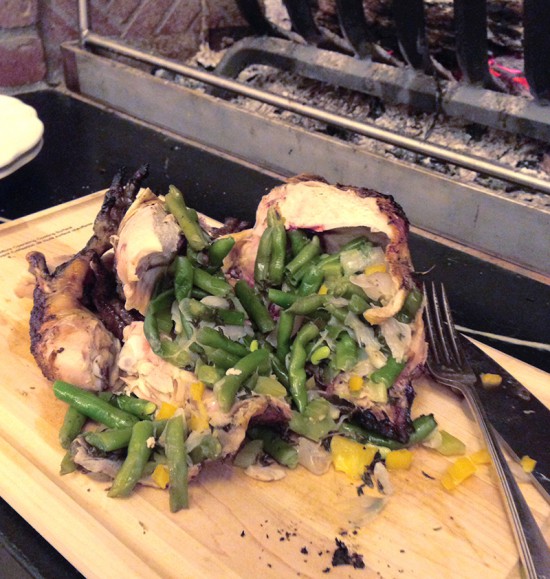