Adapted from a recipe by Galen Sampson, Chef and G.M. at the Beaverkill Valley Inn that he demonstrated over fire at the BVI.

Galen Sampson has settled into a comfortable life with his wife on the edge of the Upper Beaverkill River in the Catskill mountains. As the Chef and General manager of the Beaverkill Valley Inn, Galen works hard to create new and interesting dishes and experiences of all kinds for his guests. Chef Sampson’s recipe is a good example of how he responds to expectations that an Inn on a famous trout stream should serve trout, without pulling fish from the Inn’s private stretch of river. This is a highly prized trout fishing paradise that requires all guests to agree to catch and release practices prior to stepping into the special mile of river.

In 1963, about 5 miles up river from the Beaverkill Valley Inn, the Shaver family transitioned a dairy farm into a trout hatchery. As today’s hatchery manager, Sherry Shaver explained that her Great Grandfather wanted to try something new, so he dug a series of pools paralleling the river and fed the river water into the pools. The pools are like steps, gradually following the downhill slope on the edge of a dirt road across the street from an old dairy barn. Since that time the Shaver family has developed an expertise in raising trout from years of passed down experience and a lifetime invested in Catskill mountain living. Sherry tells stories of bears that have broken irrigation pipes and visitors who have learned to trout fish on their casting pond. She also explained to us how several times a year the trout or fry are moved from troughs inside near the incubators to outside locations as they grow and develop.

During our visit, Sherry showed us how the trout progress from inside in incubation rooms to tanks, then pools and finally to the counting pen where they are removed by nets into containers. The Shaver family crew then removes the trout by hand, examines them and sort them for delivery. The Beaverkill Trout Hatchery has several free flowing pools that contain trout from 10 inches to 28 inches, all are separated by species (browns, rainbows & golden) and size. This allows them to fill orders from trout clubs, municipalities and chefs in the Northeast. While we were there, we watched as they curated a delivery of 400 trout of mostly 12 inches, some up to 24 inches and 3 goldens of 26 inches for a town fishing derby on a river in New Jersey. 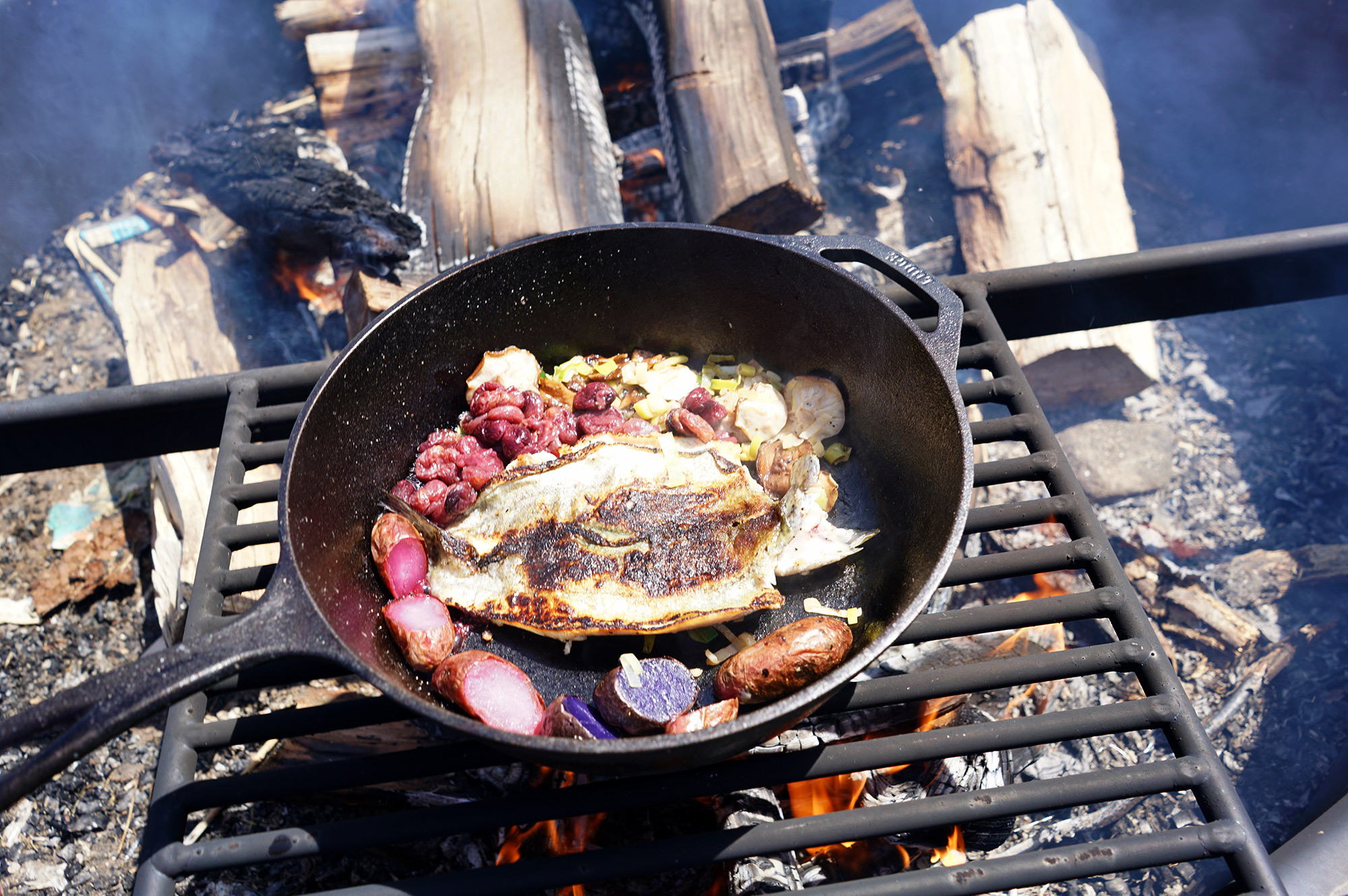 Chef Sampson, from the Beaverkill Valley Inn has been a regular customer of Sherry’s since he arrived at the BVI 3 years ago. He reports that their arrangement is very similar to other, more traditional vegetable farmers that he sources from in the Catskills. Orders are specific to the need. With the Beaverkill Trout hatchery, this generally calls for 12 inch rainbows filleted but for a special occasion he will buy larger fish, almost always rainbow as he prefers their brighter, sweet flavor compared to browns which often feed lower in the pools and have a muddier flavor.

As he approached preparations for this dish, the chef roasted potatoes and grapes in advance (on separate sheet pans) for about 20 minutes in a 375°F oven. Both were tossed with a splash of oil, salt & pepper. The shitake mushrooms were stemmed, sliced and sauteed with leeks & butter, then placed in a container to cool. Shallots for the grape relish were sliced and sauteed then combined with the roasted grapes before chilling in a sealable container. All of the prep was chilled and sealed for transportation to the fire site.

When he had his fire just right all that was needed was a cast iron skillet. All of his ingredients were ready to place in the hot pan. Once the well seasoned skillet had been brought to high heat he simply placed the trout skin side down in the pan, then placed the pre-cooked mushrooms & leeks on one side, the pre roasted, sliced potatoes on the other and after about 2 minutes he flipped the trout to finish. The grape relish was added to the pan and it released some of its moisture. After the fish was plated, the warm grapes were placed on top. 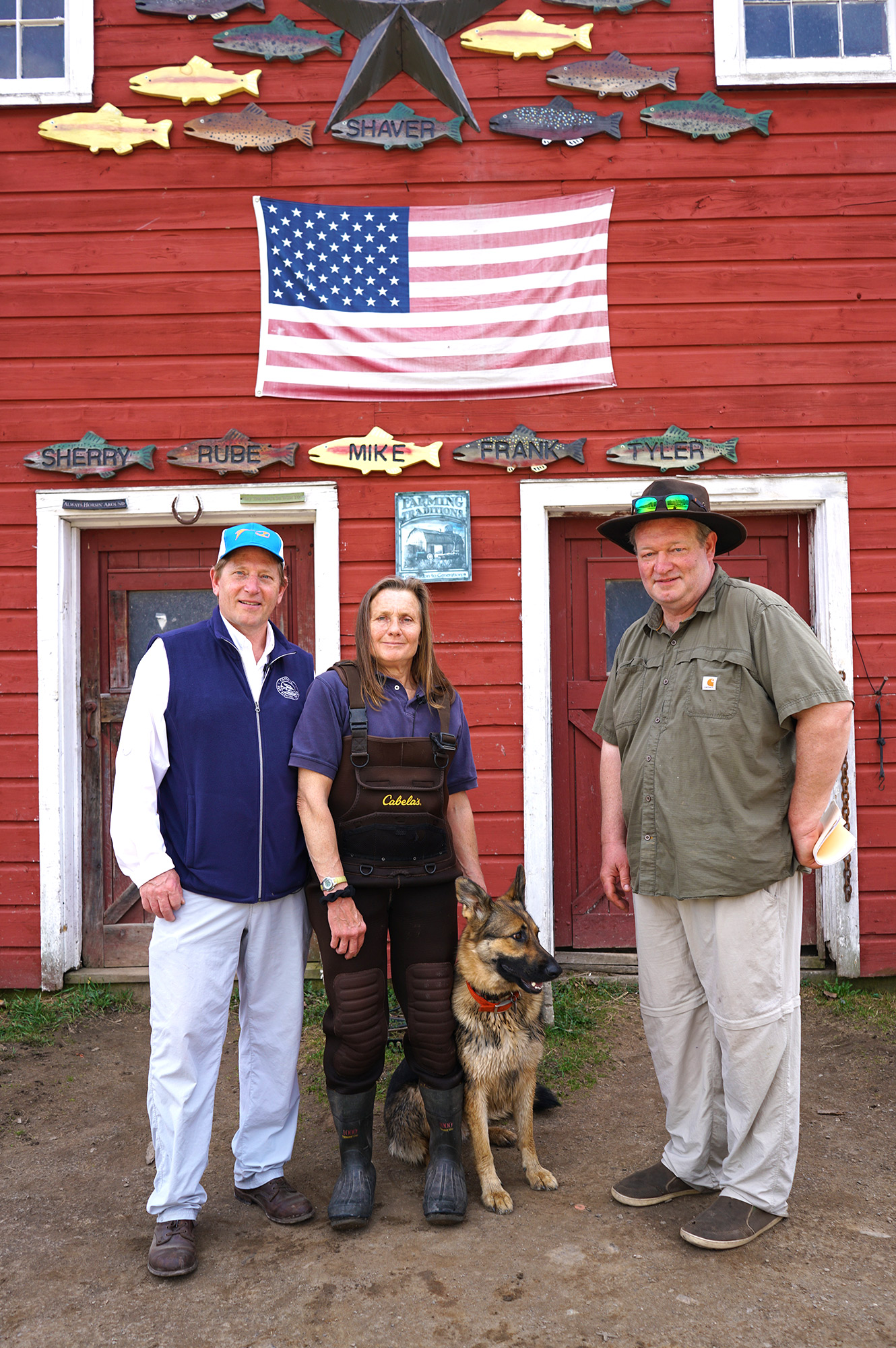 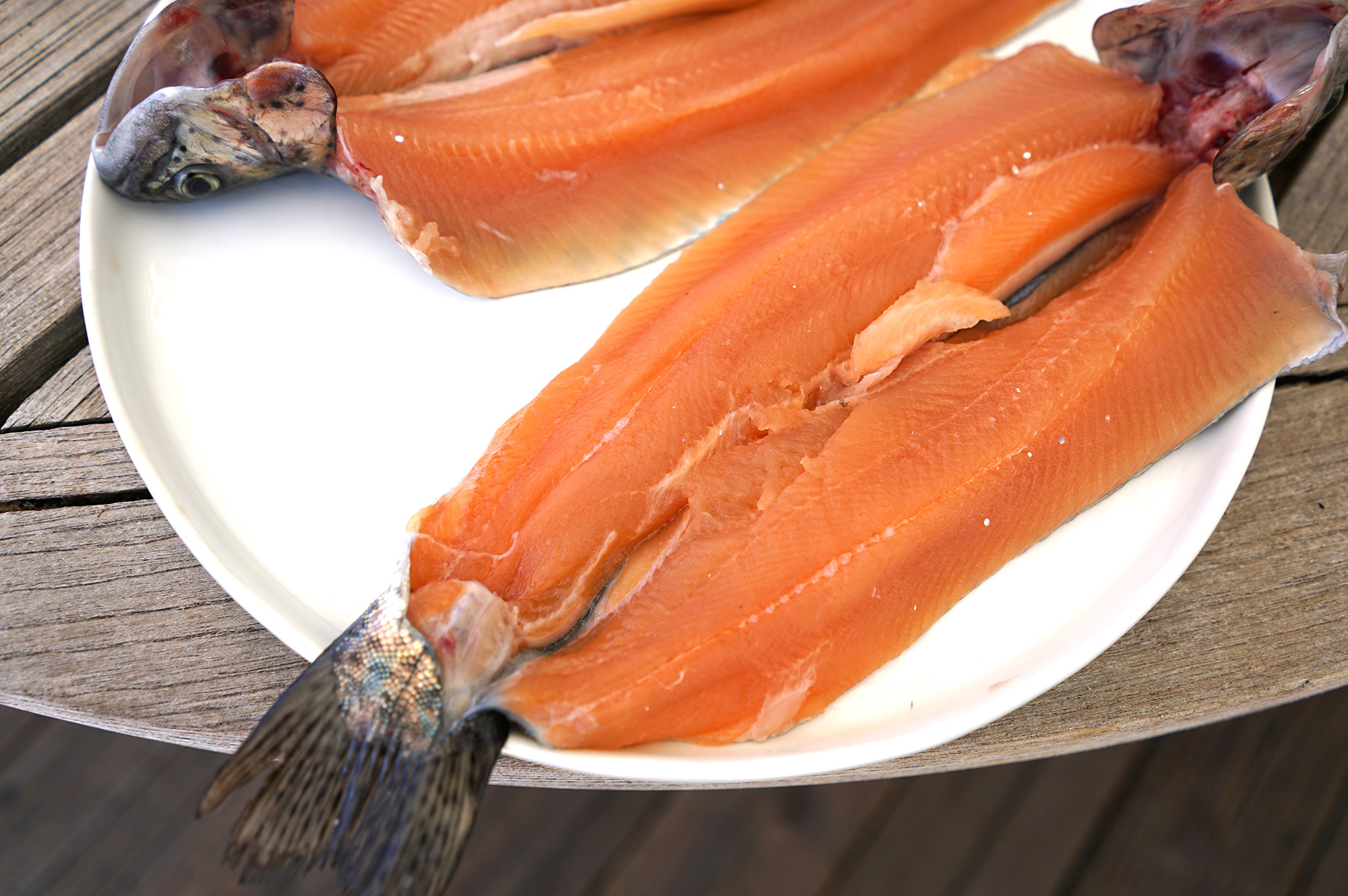 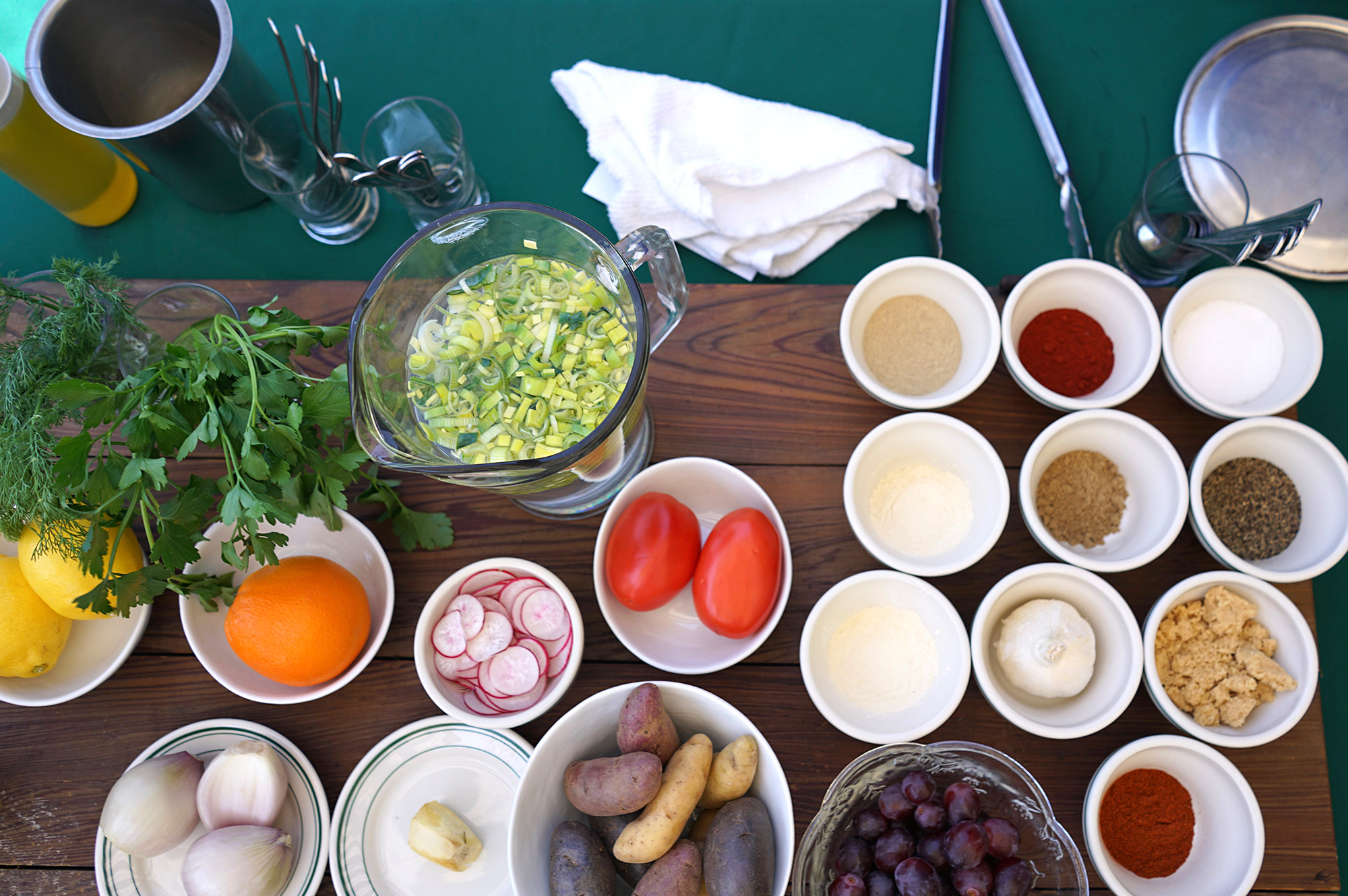 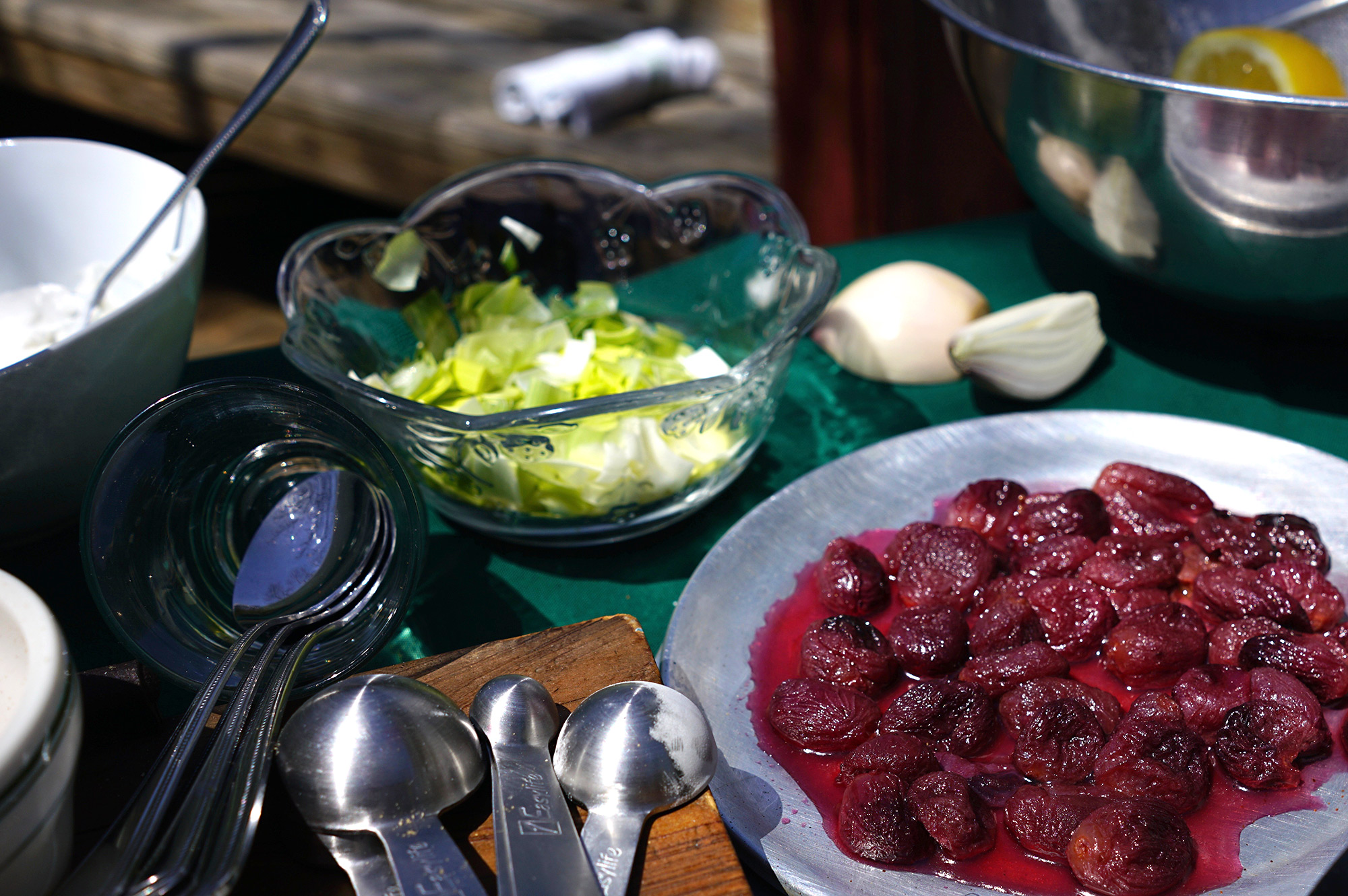 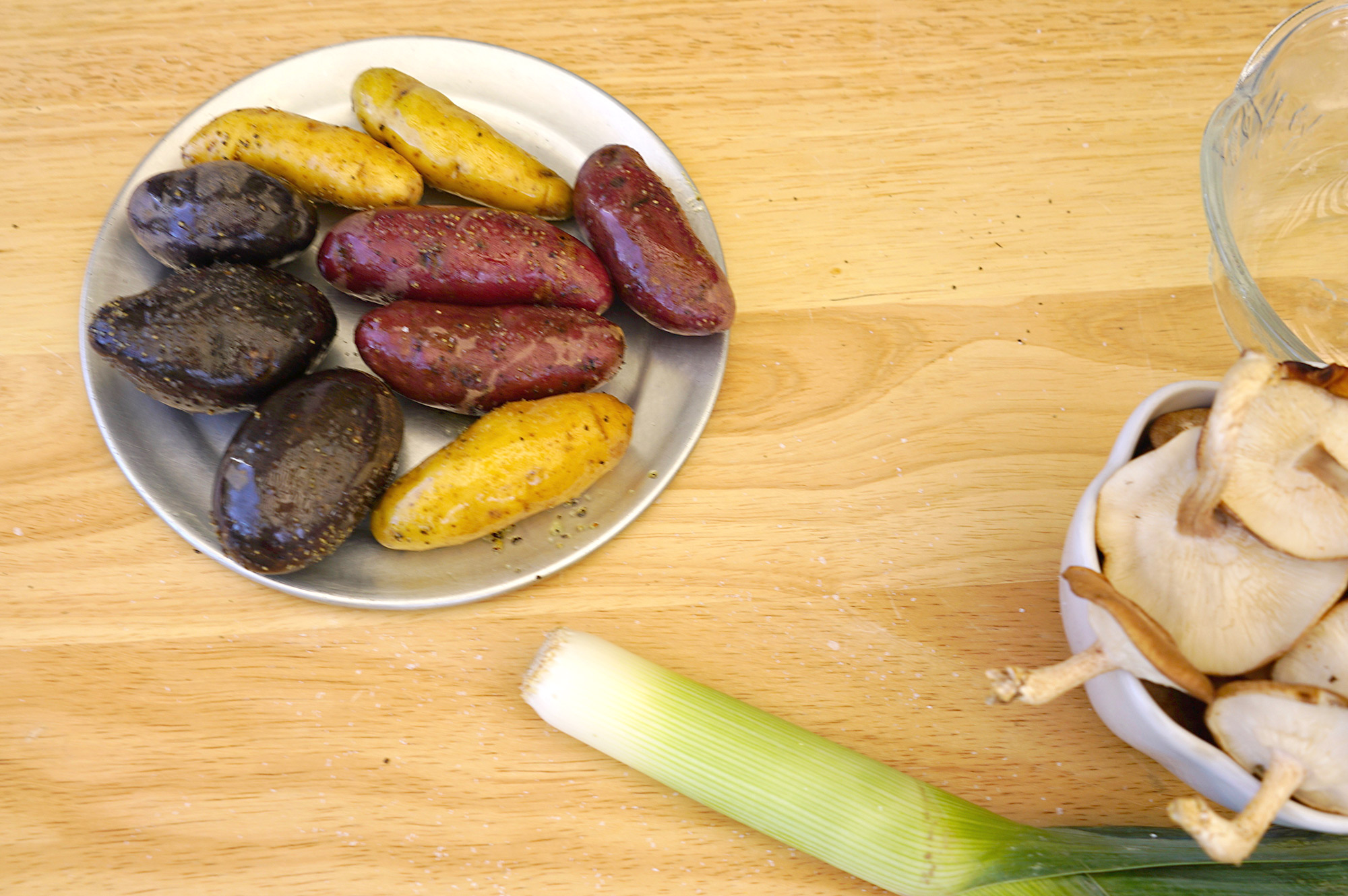 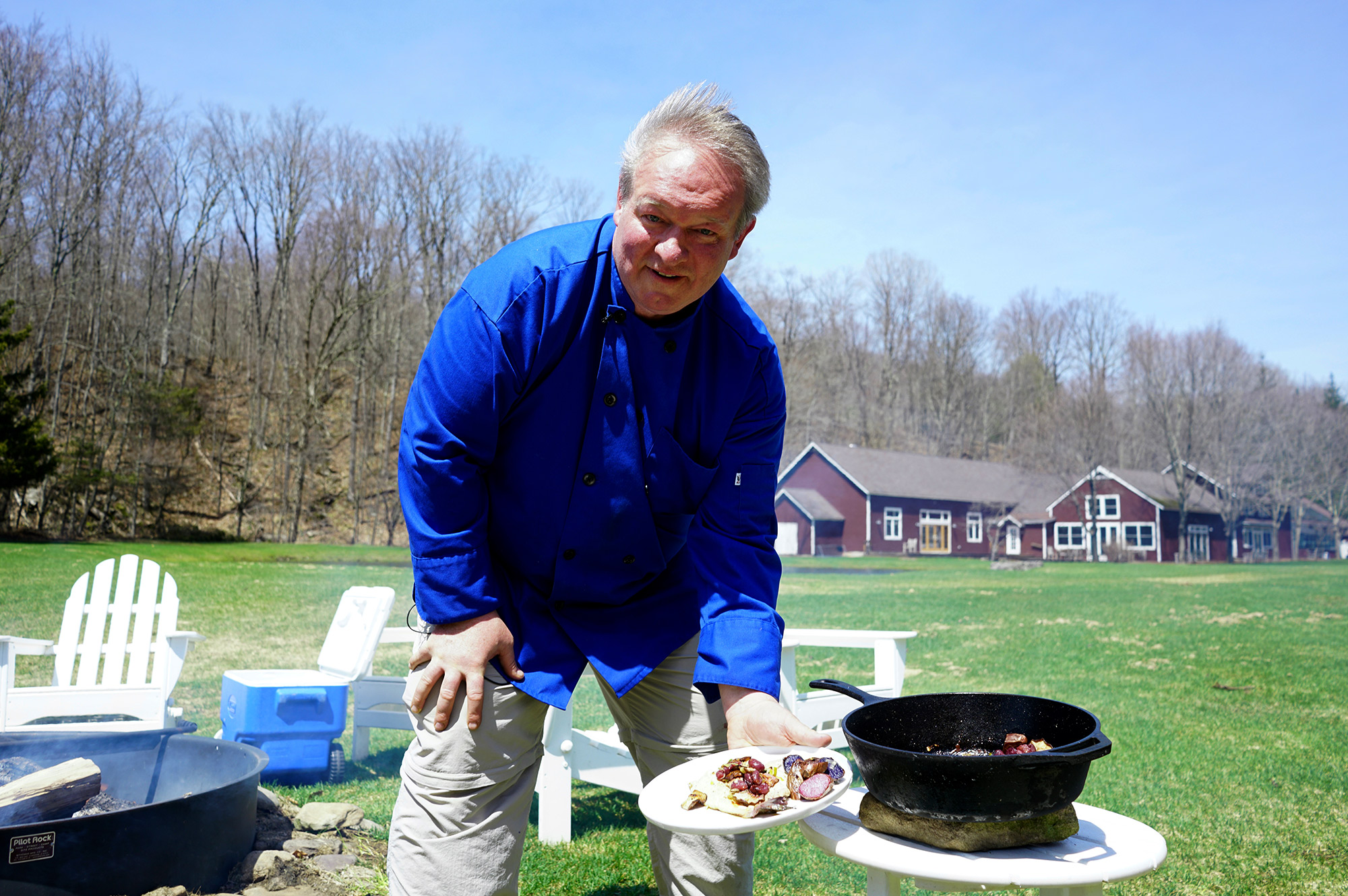 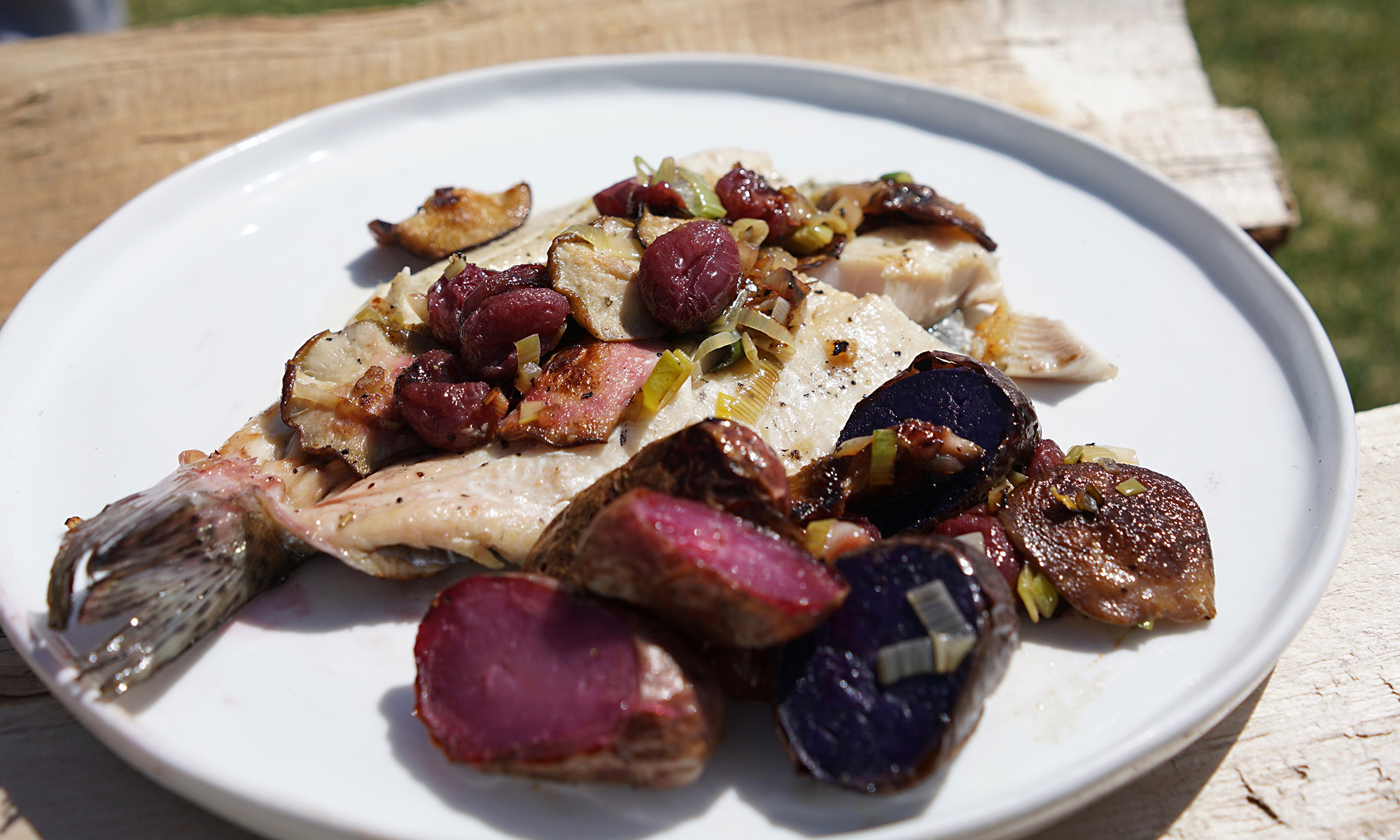 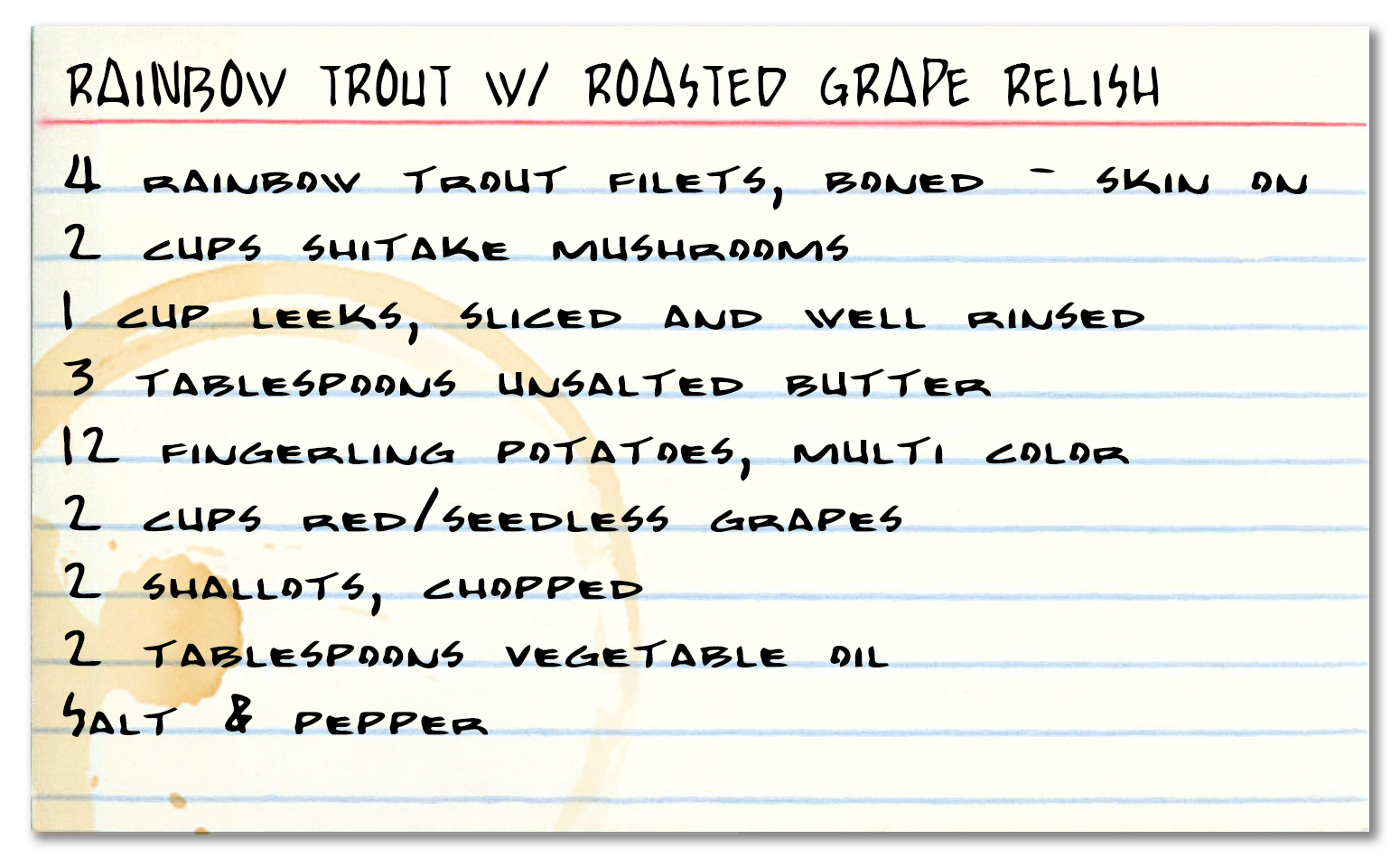