A Casual Venue for Contemporary Art

Over the years, Colin Ambrose, the restaurateur, has developed relationships with hundreds of artists, many of whom are regulars at Little Estia

Colin Ambrose, above, the owner and chef of Estia’s Little Kitchen in Sag Harbor, has a longstanding relationship with the region’s artists. Barbara Thomas, below, will exhibit paintings of vegetables from her garden, including a variety of carrots, at the restaurant during April and May.

Slow food, sustainable agriculture, organic farming, and farm-to-table are terms that are so ubiquitous in the ever-expanding culinary world that hardly a restaurant opens today that doesn’t tout its use of locally sourced organic ingredients.

END_OF_DOCUMENT_TOKEN_TO_BE_REPLACED

Join Us for a Magical Evening

Ella is a local organic farmer who will be attending a farmers training program in Santa Cruz, California. To be able to attend this program, Ella is inviting the community to a fundraising dinner at Estia’s Little Kitchen. 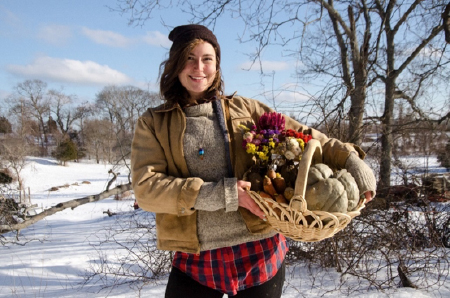 END_OF_DOCUMENT_TOKEN_TO_BE_REPLACED

The local chef worked with local chefs and farmers to create the video.

Colin Ambrose, a chef at Estia’s Little Kitchen in Sag Harbor recently debuted the first video in his Seed to Plate Production Series.

The video features several Hamptons chefs, farmers, and foodies and documents the creativity and versatility of the carrot.

“I had an idea last fall to foster a rich dialogue between local farmers and chefs. I invited them to plant the same carrot seeds — Scarlet Nantes — in their soil at the same time (mid-August), and to share both crops with local chefs for a special tasting event at Estia’s. Farmers were also invited to grow a carrot variety of their own choosing concurrently,” Ambrose said. “The result was our ’Carrot Palooza’ celebration event, our first in a series of root tastings, which will be followed this summer with the planting of beet seeds and will culminate in a beet tasting event this fall.”

END_OF_DOCUMENT_TOKEN_TO_BE_REPLACED

Go to the original article on Beachouse Hamptons website

As an owner myself, I know that restaurants, like our most cherished relationships, are a labor of love. To succeed, they require more work and dedication than most anyone can imagine. Of the chef, the demand is nothing less than an intrinsic passion and understanding of food. From the management, service is the top priority. Now, just for fun, add-in operating your establishment on Long Island’s East End, home to the most demanding and discerning palettes anywhere! The North Fork Table & Inn, consistently ranked with New York’s top dining venues, is proof-positive that  these attributes can – and do exist – everyday. If you enjoy destination dining, a reservation at this iconic institution should be on your near term bucket list.